Yes! What a fascinating subject!

So gather round while I expound upon file naming conventions and how many sub-folders is too much...

If my father taught me anything, it's that redundancy is a good thing. Call him the Techie Martha Stewart, if you will.

I like multiple copies of my genealogical source information. And when I say multiple, I mean more than is seemly. So my paper sources documents have been scanned, and my electronic source documents have been printed. My bad karma when it comes to printing (not just for genealogy but for previous jobs) is hopefully being evened out by my donations to the American Chestnut Foundation. Check them out, we need our trees back!

Today's focus is on the electronic copies of source documentation. Don't just save it to your hard drive. Also save it to an external hard drive. And also back it up on some kind of media. Set up a schedule, like people do with spring cleaning - so that every spring and fall you do a massive backup of your files. And don't just backup the new stuff...back up everything.

I'm also fond of multiple formats for my image files. So everything that I scan gets to be saved as a TIF and also a JPEG or JPG or whatever it is. Don't ask me, I just do the saving and opening.

You get the idea. Sometimes, to spice it up, I don't sit down, but stand at the computer. Or I make it into a drinking game and everytime I have to put the word "unknown" in a title I get to toss one back. Genealogy is fun! :-)

Saving all these documents that one scans or finds on the internet is not helpful unless you can find what you are looking for. So when I come across some tidbit of information somewhere, I need to be able to immediately access the document I know I have to compare to it.

It's important to use folder names that mean something to you, but at the same time, not ridiculously arcane just in case you get conked on the head and get amnesia. You want to be able to find your own stuff from the trail you left behind.

Firstly, I have the hardest time spelling this word. For some reason I want to spell it -cemetary-. Even now, that looks nicer to me. So try to spell things right or people will laugh when you are trying to show off.

I like to store not just photos from cemeteries, but also any lists of interments I find on sites like rootsweb.com. I never count on a website being there when I go back to it. So I often copy webpages into a word document and save it. Here I save info for my cemeteries in folders that are named from the least specific to the most specific bit of information. So, State, Country, City/Town, Cem. Name or Descriptive Term. 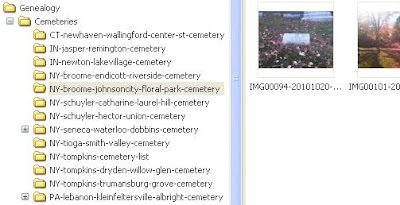 The most important thing to remember is be consistent! If you are consistent, you get information just by looking at the names of your folders or documents, without having to open anything.

Yes, I named the folder "Censi" which may not be a word. To me, it is the plural of "census". I don't think it's technically a mis-spelling like "cemetary" so I just enjoy it. 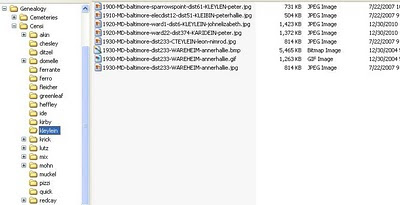 Anyway, I use sub-folders of surnames and within each is a copy of census images. Again, you'll see that I use a naming convention of least specific to most specific: Year, State, County, City/Township/Village; District/Ward; Last Name; First Name.

A couple rules also exist. If the county and town are exactly the same, I tend to not repeat them since that would just make for an extra long file name. Since nearly all of these census records were found on ancestry.com, I use the spelling that returned the search result. In some cases, the spelling is not even CLOSE - but I've had situations in the past where I had a census record, and then went back to ancestry.com to search for it so I could see neighbors on the previous and next pages, but couldn't find it using the correctly spelled surname. This way I always know what spelling found the image for me. I always submit a transcription correction to ancestry, but they leave the wrong one as the primary. And finally, if there is a spouse, I include their first name along with the head's first name.

What's cool about this naming convention is that just by looking in a surname folder I can see immediately who was living in the same area during one census.

Over the decades, sometimes I accidently saved multiple versions of one record. In the old days, websites often gave you a BMP. I haven't deleted those because they are usually nice images to reference, so sometimes I have multiple formats of one census record. It's OK. And, it's okay to save the same census image in different surname folders if it's about both of them. Remember, redunancy is good.

Sometimes you come across someone that you just KNOW is related, but you aren't sure how - I save them too - in a mystery folder. One day, they'll get promoted up to the main surname folder. 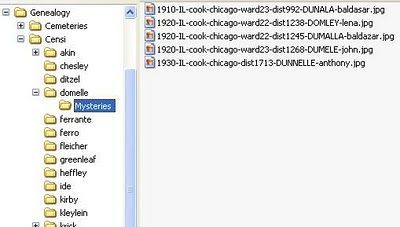 I keep these all in one spot rather than separated into different surname folders because certificates are super important. I like to put the name, date and type in the file name. 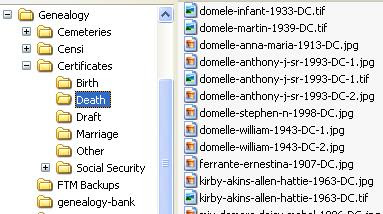 I agonized for a while over how to handle the married names for females. I finally decided that I would use their maiden name first, then any married names after that.

Another spot where it's okay to have duplicates. I'm often looking for a photo of a specific person. This way I can go to their photo folder and find the photo. If there are other people in the photo as well, a copy of the photo will be in their folders as well. Duplication in this case is fine.

And yes, it takes up a lot of room, especially when you are saving both TIF and JPG, so maybe there is just one Archive folder that has TIFs so you aren't duplicating them - depends on how much memory you have.

Finally, I keep a set of surname folders where everything that is not a certificate or census record is kept, kind of a catch-all for the miscellanea. 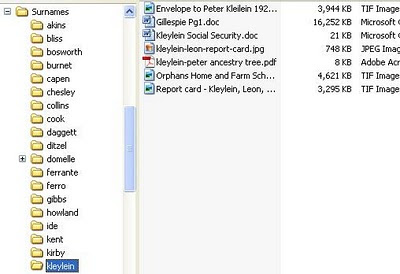 1. Duplicates are good, as long as they are planned and not accidental.
2. Redundancy is also good.
3. Drinking games are an excellent way of easing any tediousness that occurs due to #1 and #2.